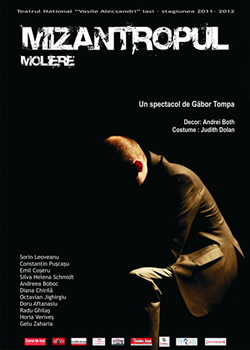 Why have a trio of UC San Diego professors brought an earthquake to Iasi in eastern Romania?

It is a humid evening in this former capital of Moldavia, the most eastern province of Romania, bordering Ukraine. A dress rehearsal of Molière’s “Misanthrope” is underway in the contemporary Black Box.

Molière in Romanian sounds Italian with an overlay of Slavic phrasing, and is intense, almost breathless at times. The three UC San Diego Theatre and Dance professors, Andrei Both, Judith Dolan and Gabor Tompa, watch from tiered seating, far from their classrooms and studios in La Jolla.

The Black Box is situated in the grounds of the Vasile Alecsandri Teatrul National. Built by the celebrated Viennese architects Helmer and Fellner in 1894, the National Theater is being renovated behind a girdle of scaffolding and swathes of canvas, leaving the Black Box as the present home of the company. A city of monasteries, five universities and numerous tree-shaded parks, Iasi (pronounced Yash) celebrates its prolific literary past with busts of its authors, poets and playwrights everywhere. And the gutted interior of the Teatrul National with its ornate gilded ceilings, chandeliers and murals is a fitting pantheon to the city’s long-lasting affair with literature.

It is in the middle of the fifth act of “Misanthrope” and Gabor Tompa, head of directing in Theatre and Dance at UC San Diego, interrupts the dialogue between the male and female leads ,Alceste and Celimène. He jumps up onto the highly polished black, stage floor, in constant motion, gesturing and answering questions, “Da da” (yes, yes) and “Nu Nu” (no, no). Andrei Both, the graduate design professor at UC San Diego joins him on the stage. A conversation ensues about the height of an elaborate crystal chandelier suspended over the action. The set, which was built in Bucharest and trucked the 500 km to Iasi, is chic and sparse, with reflective black surfaces, weirdly angled bright red bookshelves, a grand piano, and a gleaming white bath positioned behind cut glass panels.

“Some of the ideas for the set came from the images of very high-end New York lofts, the kind of thing you see in the magazine Object,” says Both. “It was important that it looked like a feminine space – Celimène’s space. The space of an empowered woman.”
Meanwhile Judith Dolan, a Tony-award-winning costume designer, who is also a professor of design at UC San Diego, takes her Romanian assistant Mariuca aside. A new dress has not yet arrived, or may have arrived and not been picked up or may have been picked up but … There is a certain Romanian logic to all of this, and Dolan is patient. She, too, has a strong sense of what the show will look like and is persistent in the face of glitches. “The fundamental thing was that if I was to design Molière for Romania, I was going to design it with a sense of the American spirit,” she says. “That relates to everyone in Celimène’s household – a sense of the casual and nonchalant, people who create their own sense of fashion. It is very much a “Misanthrope” that is NOT set in Paris.” At that stage, one of the actors walks onstage in one of the “non-Paris” designs, an actor in a zoot suit with a bold pink fedora. “I found that in LA and brought it over with me,” Dolan says with a knowing smile.

Tompa and Both pace the set – the upcoming earthquake is on their mind. Both makes sure that a large bird of prey, a symbol of Molière’s scheming characters is well anchored. He strokes its feathers. “You have to be resourceful when you are designing here,” he says. “We needed a predatory bird on the set and it came from the natural history museum here in Iasi.”

Tompa calls Both to take one last look at the chandelier and makes sure the actors know where they will stand. That SoCal earthquake concept is about to be tested. “We conceived the idea of the earthquake in Act V during our working sessions in San Diego,” says Tompa. “It’s symbolic of the break in the play, a split between what has been happening and what will. The moment of decision, if you will.”

And is a concept that will not be lost here as earthquakes are not alien to Moldavia (the latest at 4.7 being in May of this year).

Before they start again, Silva Helena Schmidt , who plays Celimène, needs to talk to Dolan about her dress and the amount of physical action she has in this act. She is a handsome young woman, with a cascade of tight golden curls and a figure accentuated by the svelte silken dress that Dolan has designed. The costumes are both revealing and commanding. “I saw Celimène as a very smart young woman who is determined to make her own rules in a society. A little brash, but sexy in her strength,” says Dolan. “She is often played as more of a tease, more of a flighty character.”

The actors resume. The sharp intensity of the exchange between Alceste and Celimène conveys the approaching denouement. A black-suited servant enters and indicates that Alceste must leave. A moment later, the Black Box theater suddenly quivers and trembles with its SoCal-inspired earthquake. The floor splits in a wide, jagged V-shape and pours white smoke into an ice-blue neon-colored light. The chandelier jerks in a wild spasm. The actors stop, take in the moment and then smile. “Da. Da.” They like this, now they understand its context.

The “Misanthrope” will run in repertory in the Vasile Alecsandri National Theatrul’s Black Box throughout the performance season; it opens Sept. 23. It’s a bit far to travel for a ticket and anyway it is already sold out. They do love their theater in Iasi.

Professors Both, Dolan and Tompa teach fall classes at UC San Diego. Will “Misanthrope” be on the curriculum? They laugh. No. Maybe next year when they get time to dissect and evaluate the experience.